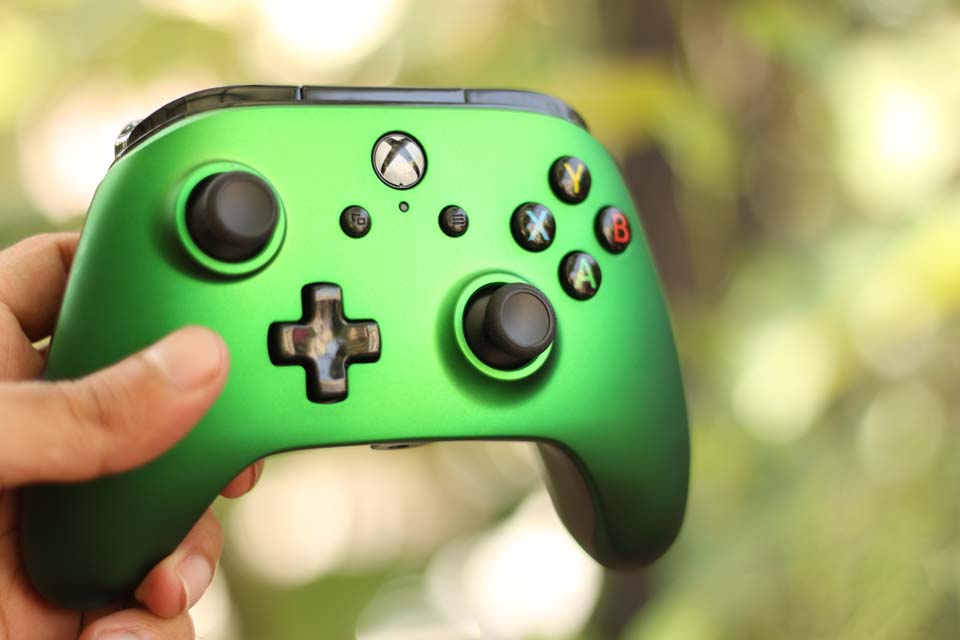 Accessory maker PowerA is back at it again, this time with PowerA Enhanced Wired Controller For Xbox One. The controller is available right now in the States and will be available starting the third of August in the UK. Nine color variations are planned. The controller comes in at around half the price of the first party version making it incredibly affordable. Lets get into our PowerA Enhanced Wired Controller For Xbox One Review. 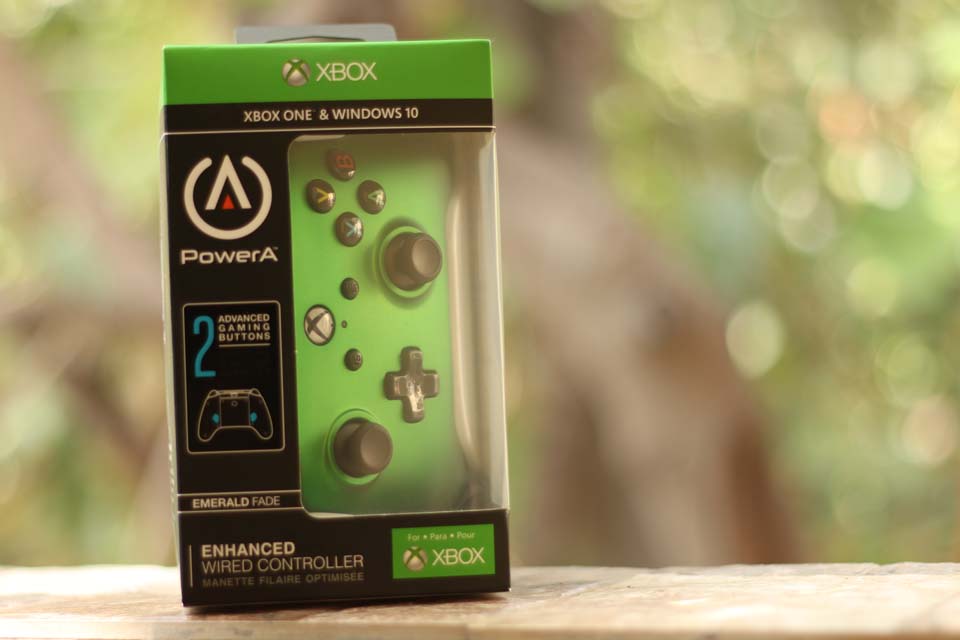 In terms of design, this product absolutely nails the traditional Xbox controller look and feel. It feels around the same weight as the standard controller and is identical in size and button placement. The two triggers even have the same outward curve which is fantastic for genres that are reliant on them, such as shooters like Fortnite or racers like Forza Horizon 3. Those are the two games I tested the controller with most. 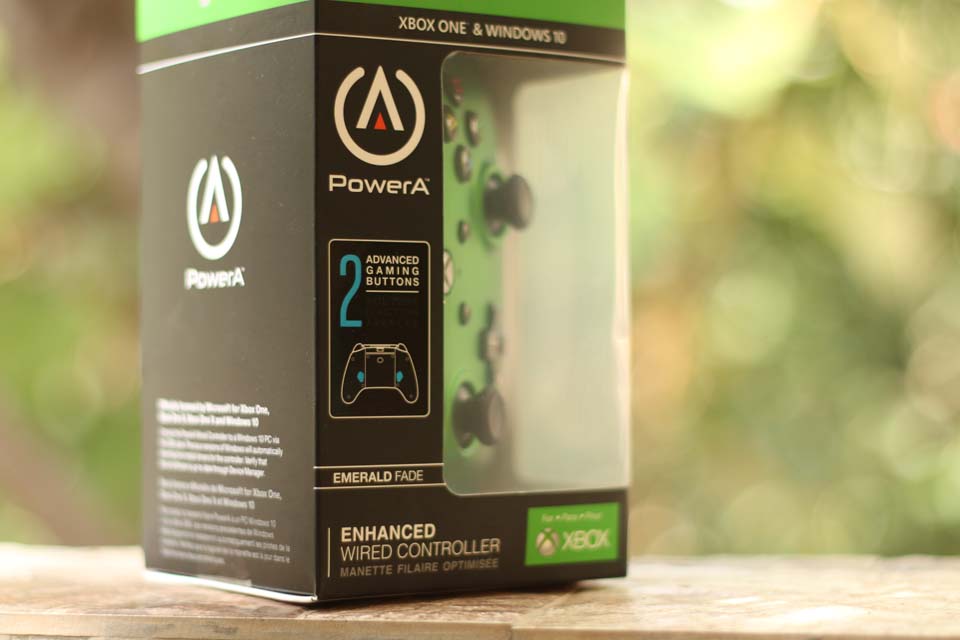 The rumble in the controller is responsive and noticeable. Again I tested it with Horizon 3 and when I sat the controller down (right now to write this section) a car bumped into me and I felt the vibration from across the couch! The controller even sidesteps what destroys most other third party options, it includes a headphone jack. This is a nice touch which almost brings feature parity with the first party option despite a huge price gulf. 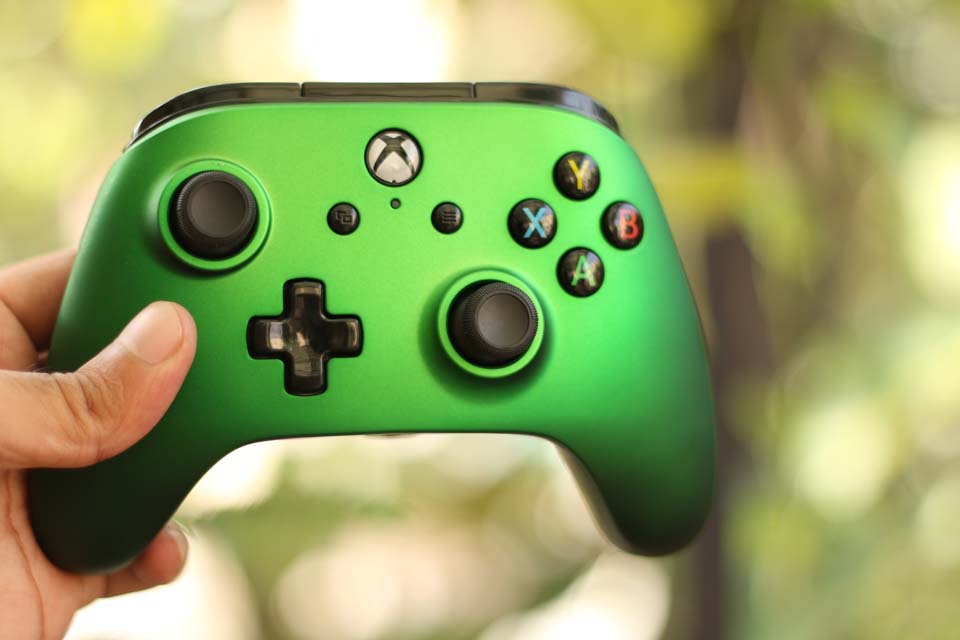 The final two differences are varied. One is that the controller is wired. This will no doubt give you an input lag bonus to the detriment of flexibility. The second is the ‘Advanced Gaming Buttons’ on the back side. These are two extra programmable buttons that can be mapped to anything. I used the right for the A button, it made jumping in Fortnite accessible without having to move any fingers from analog sticks. They are excellent. It makes you much more responsive in intense games and the fact that they’re remappable opens up a ton of options. Use them to jump, reload, interact or anything else you think will make you faster. They genuinely do work.

I touched on this in the Design section but the build quality really is solid. Almost identical to the first party controller (I could find only slight weight differences but I’m sure someone out there has the scales and rulers at the ready) and not light enough to feel like cheap plastic like so many other options often do. 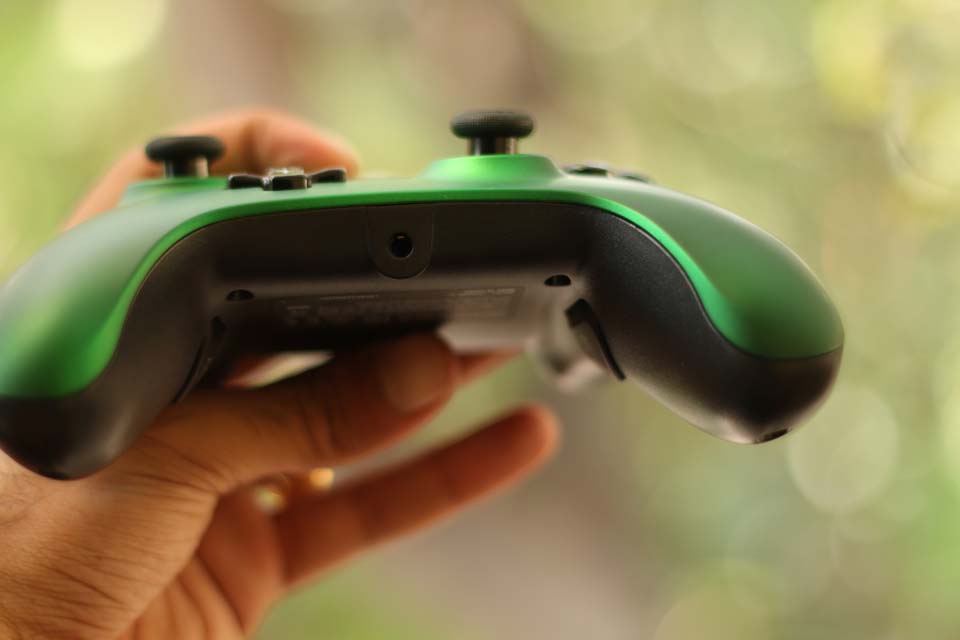 Honestly, the only difference is that the first party option is thicker due to the need for the battery pack/batteries. The cable is nice and thick so you won’t have to worry about it getting damaged. 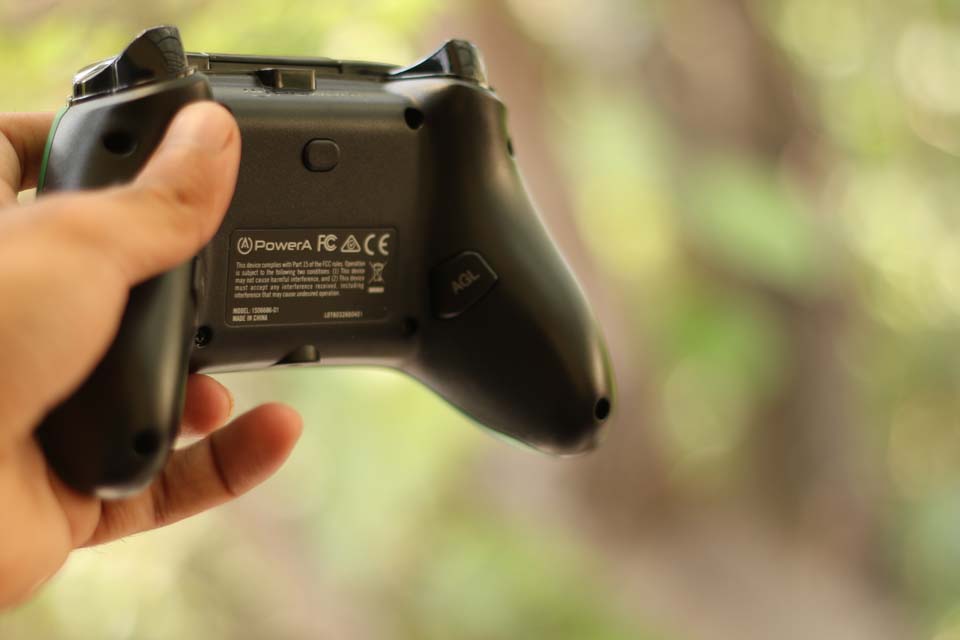 The cable plugs into the hollow hole on top of the controller. This little bit of architecture means the cable won’t get pulled or fall out easily. It’s also 9.8 feet long which makes it more flexible than you’d expect.

The controller has plenty of features thanks to PowerA. They’ve done their homework on what makes an Xbox controller an Xbox controller. The design being identical helps, throw in the dual rumble motors, headphone jack and advanced gaming buttons and you have enough differences here to make this option standout. 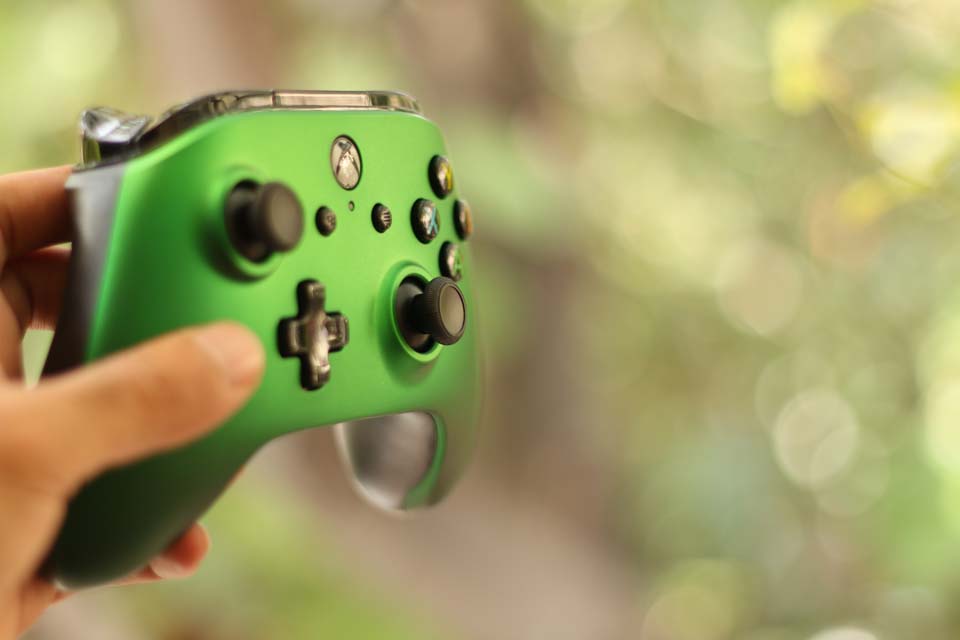 Even the fact that the controller is wired is a big plus at times. As a secondary controller to back up your base model it’s fantastic. A friend coming over to play some co-op? Just plug this in. 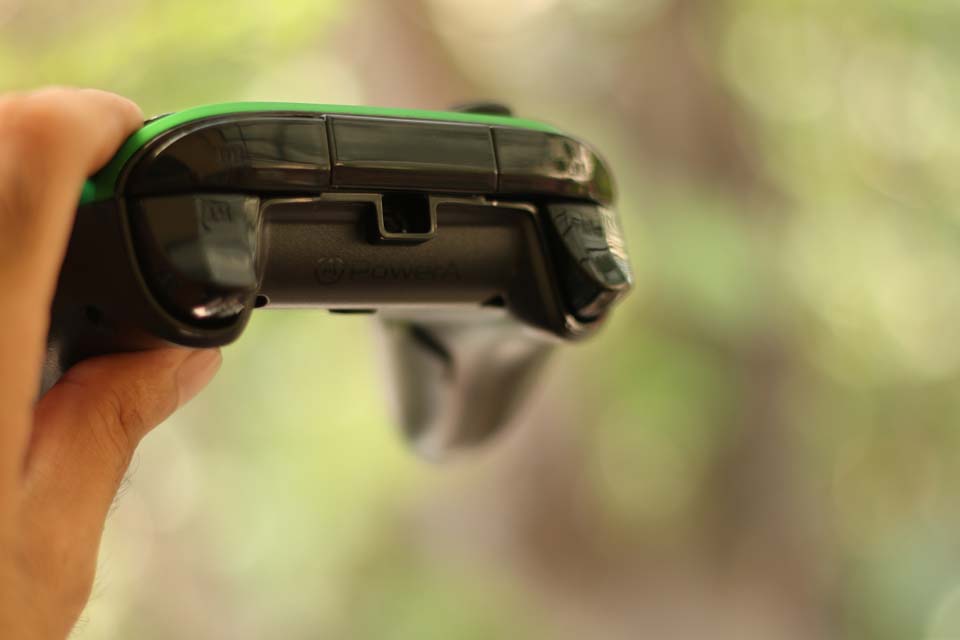 No need to worry about batteries or having it charged. As previously mentioned, the advanced gaming buttons are great additions that I’m sure people better at gaming than me will find wonderful uses for instead of simply ‘being able to jump easier’. But I stand by that it did help me play better and more responsive. I mapped the other one to sprint and not holding down the left stick felt like I wasn’t damaging my controller as much as usual (the PS4’s terrible sprint issue has given me anxiety about that).

Thanks to compatibility with numerous devices, from the entire Xbox One family to PCs, the usage on this controller is excellently varied. As a single player gamer if you run out of batteries for your Xbox controller then this is a great option to plug in and play with for hours until your other one is ready. 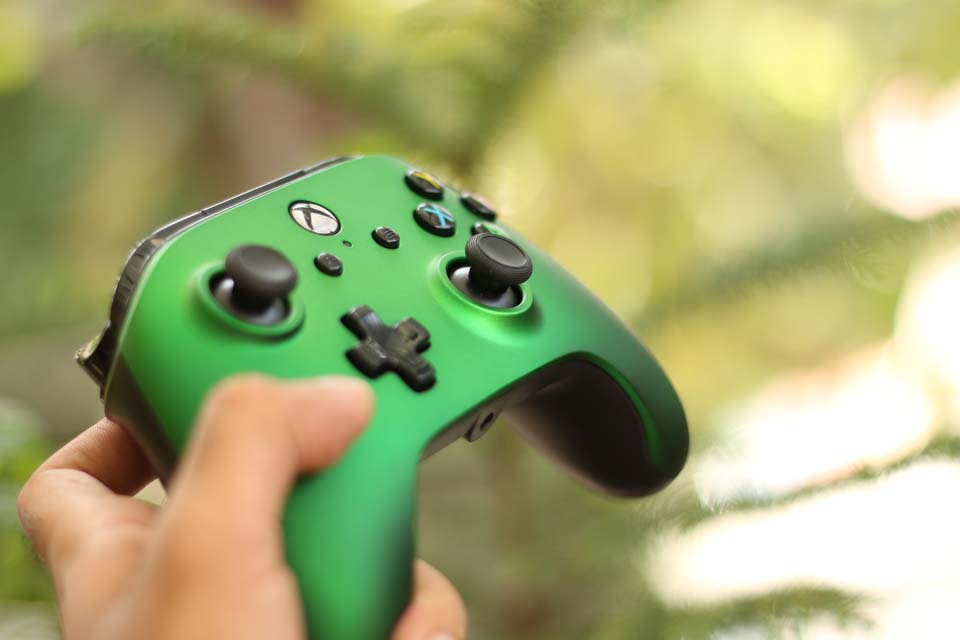 The additional features here might even make this your preferred controller for competitive matches. If you’re a couch multiplayer gamer then I’d say this is a necessary purchase. It’s ideal to hand to someone who’s visiting and looking for a round or two of Overcooked or FIFA.

Honestly, I’m finding it difficult to find negatives with this controller. Even the fact that it’s wired actually had benefits that I noticed. Simply being able to plug in and play for multiplayer is brilliant. In terms of Windows 10, it’s much better to have a controller you can simply unplug from one device and insert it into another without messing about syncing to have to sync back. 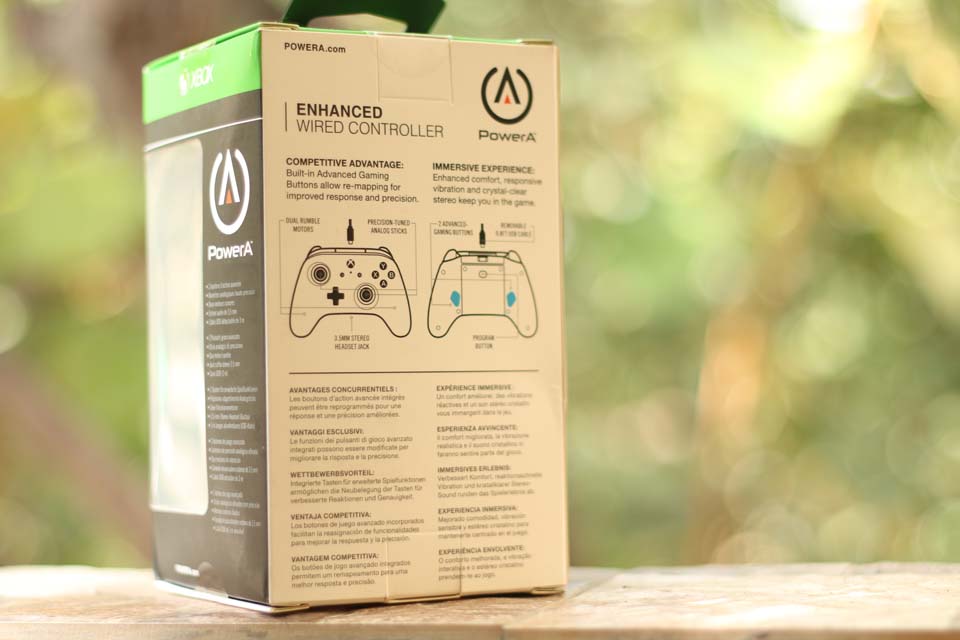 It really is a much more flexible controller with more options and is half the price. If you for any reason need a second Xbox One controller, don’t waste the extra money. Buy this and use the difference to pick up a few months of Game Pass or even nearly a year of Gold. 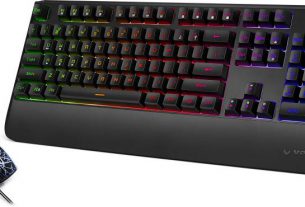 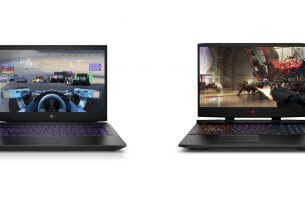