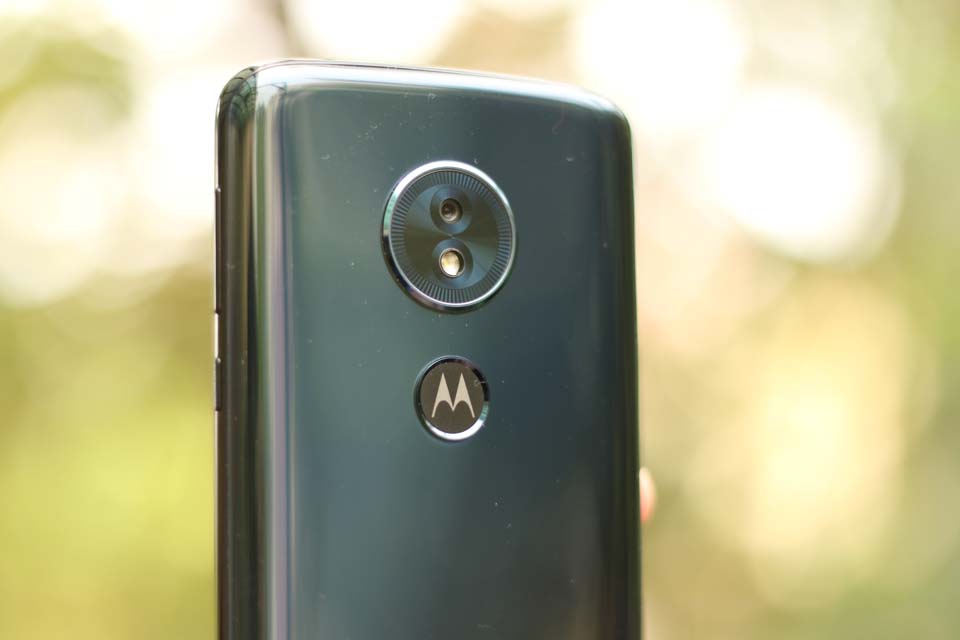 What is the Moto G6 Play?

The Moto G6 Play is the most affordable phone in the 2018 Moto G family. It looks a lot like the Moto G6 but strips away a few features in order to sell at Rs 11,999 – and is just about one of the best phones you’ll find for the money.

It offers an 18:9 screen, a smart look and more storage than most phones at this price point. However, if you can afford the extra Rs 4,000 for a Moto G6, you get a better camera, an expensive-feeling glass rear, a more powerful CPU and a higher-resolution screen. 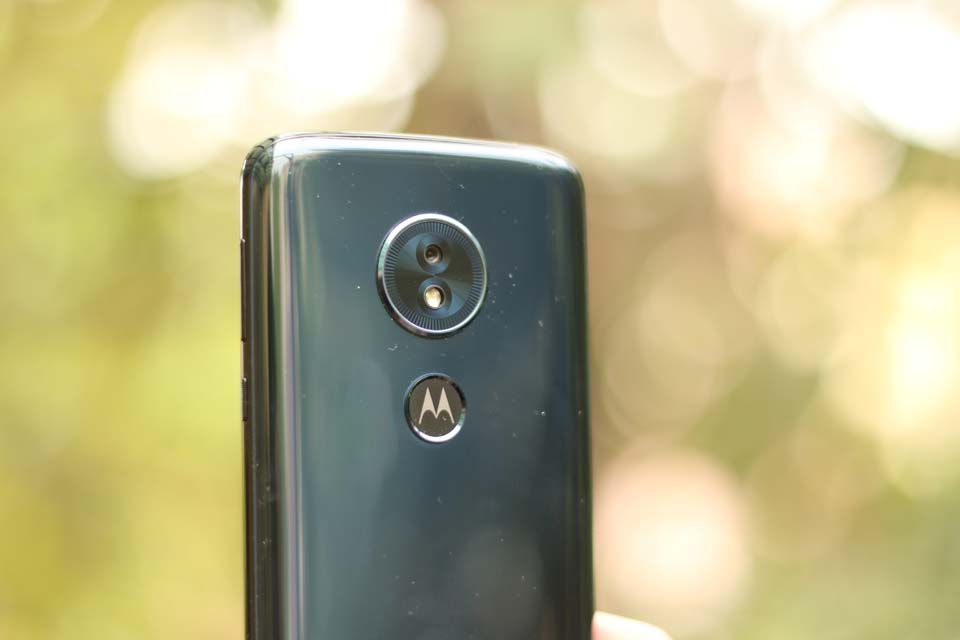 If you want a high-end flavour, buy a Moto G6. However, since this cheaper phone has a larger battery, it has an appeal of its own too.

All three of the 2018 Moto G phones look pretty similar. The G6 Play, the G6 and G6 Plus have long 18:9-style frames and curved glassy-finish rears. They may not flatten the all-aluminium Moto G5S and Moto G5S Plus for build quality, but seem far closer to current top-end phones such as the Samsung Galaxy S9 and Huawei P20 Pro. Glass is “in”. However, the Motorola Moto G6 Play doesn’t use the real thing. What you see here is plastic. 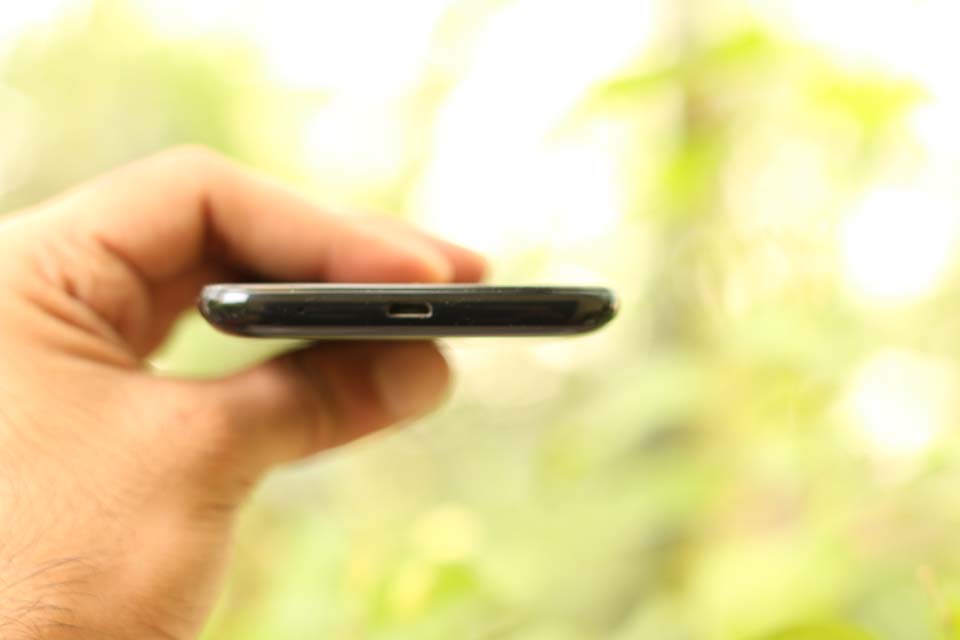 While it’s far less likely to crack than glass, it’s more scratch-prone than the Gorilla Glass 3 used in the other Moto G6 models. It still feels fairly good, though. The plastic doesn’t flex under your fingers. 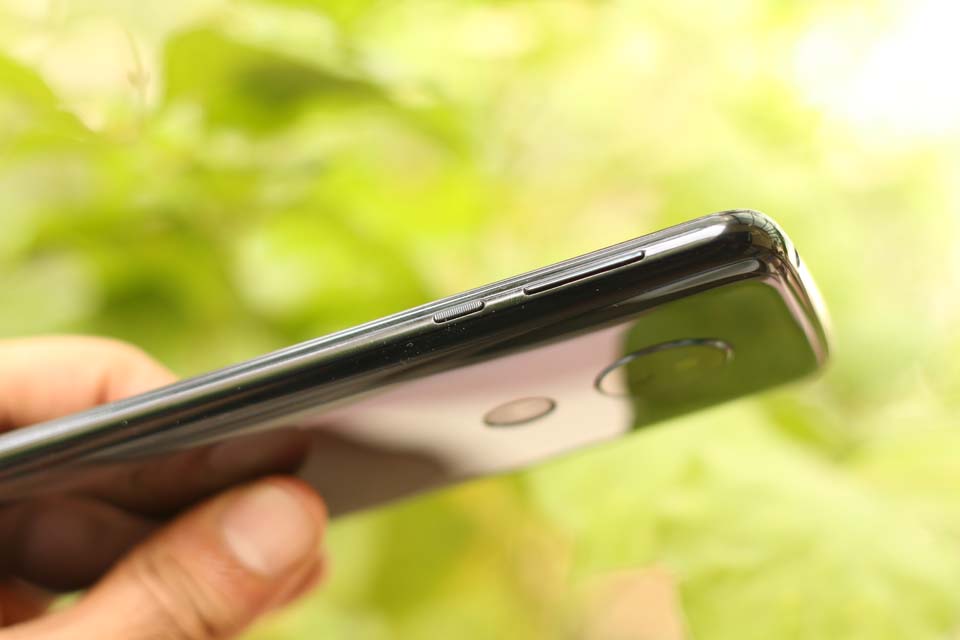 You also get a light-reactive finish under the top surface. Most of the time, the Moto G6 Play looks like a normal-but-shiny dark blue phone. However, when it catches the light you’ll see S-shaped bright blue lines carved across its back.

It adds a hint of pizzazz without getting close to garish. The phone’s sides are coated aluminium and the front is toughened glass (but not Gorilla Glass as its similarly-named siblings sport). 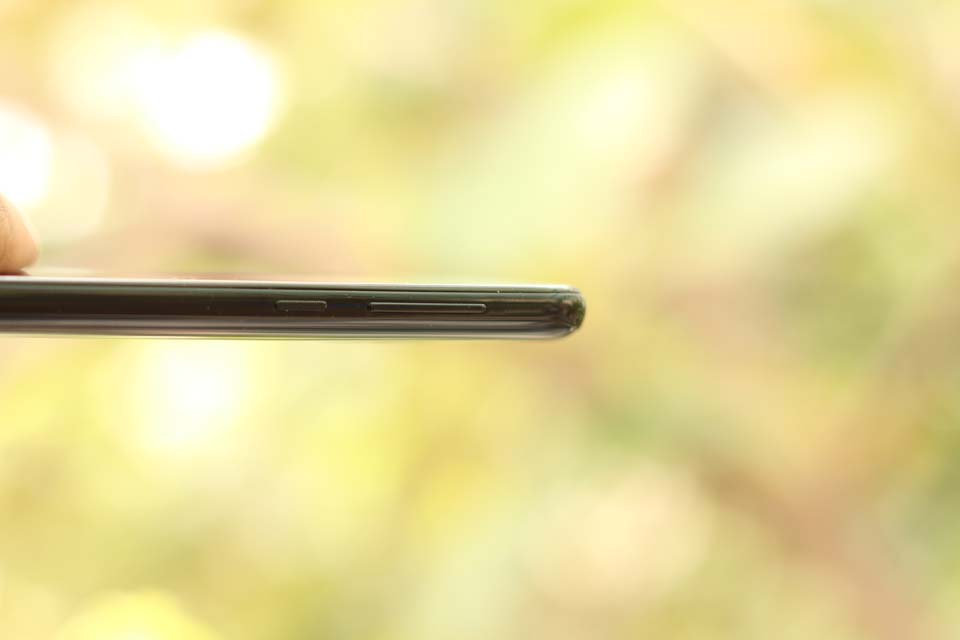 The other major external difference between the Moto G6 Play and the G6 is the fingerprint scanner. It sits on the back, instead of the front. 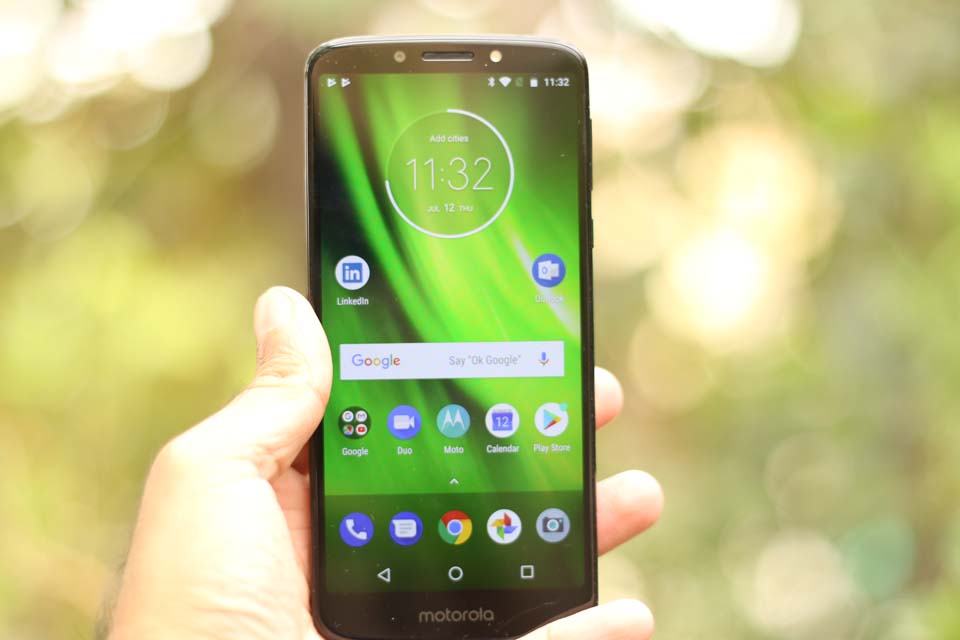 I’m a fan of rear fingerprint scanners. It’s indented and easy to reach, too. However, it isn’t quite as fast as the best, plus I’ve found it more picky about finger position than some – particularly after washing your hands. 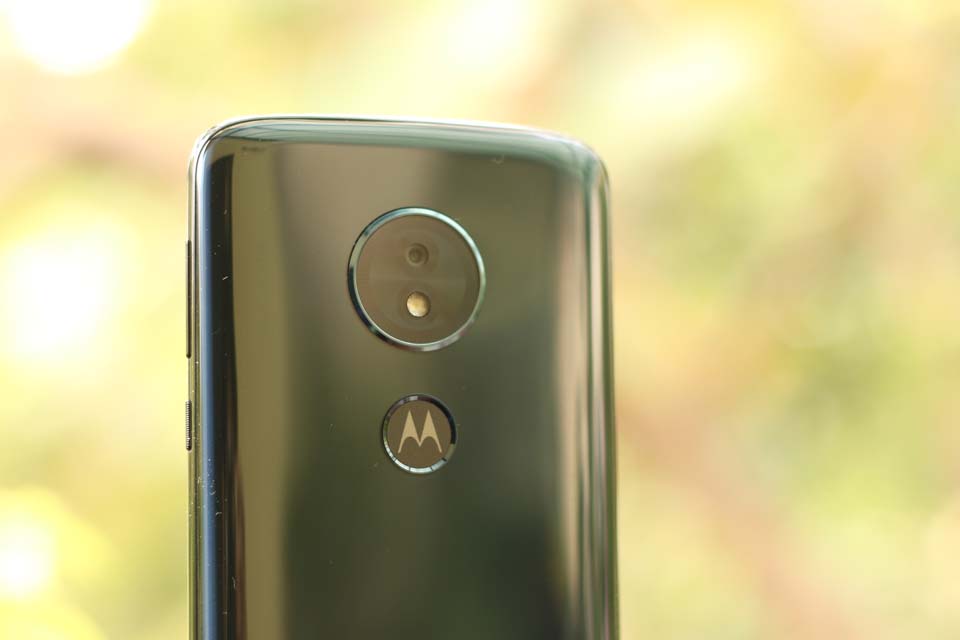 The Moto G6 Play’s scanner may be the first used by some buyers, if they’ve been buying budget phones for years. And in this instance it’s still fairly reliable and faster than using a passcode.

Other basics that can be ticked off include a headphone jack, often omitted these days, and 32GB of storage. This is plenty for a phone costing £170, but if your storage requirements exceed this then there’s a microSD slot in the SIM card tray as well.

Water-resistance is lacking. The standard G6 and G6 Plus have a water-repelling nano-coating, which at least makes them splash-proof. While the G6 Play is likely to survive being caught in a rain shower, the same can’t be said of a dunk in the bath.

The Moto G6 Play also has a micro-USB charge port rather than the now more popular USB-C type. Plus, this device also offers fast-charging, a fantastic extra at the price. 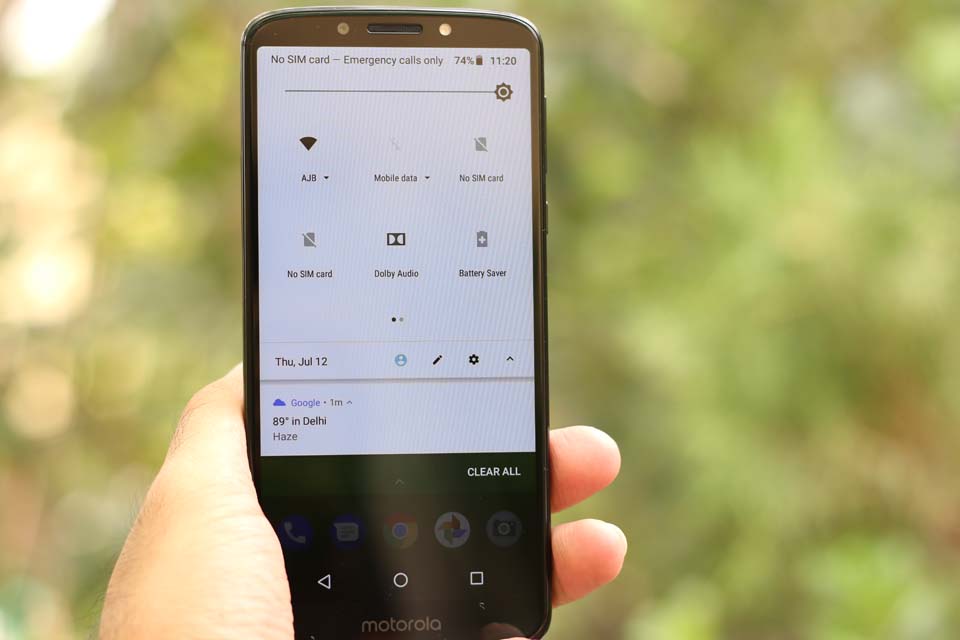 On first turning on the Motorola Moto G6 Play, the difference in pixel density is clear. Look a little closer than normal and pixellation is evident. However, within a few hours of use, I stopped noticing.

Nevertheless, there’s no denying the Moto G6’s display is closer in quality to that of a high-end phone. 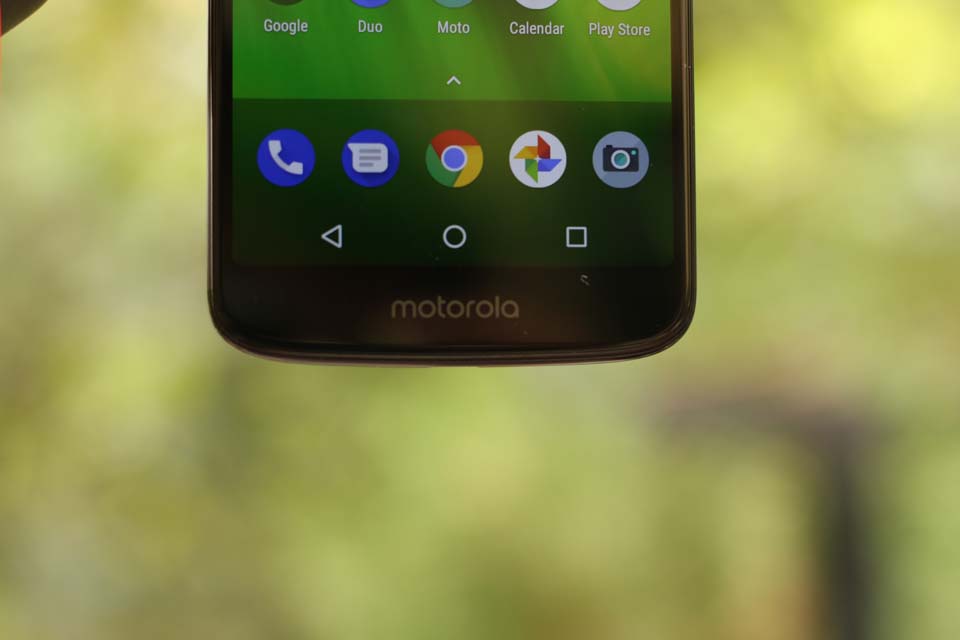 The Motorola Moto G6 Play’s colour and contrast are both strong for a budget device, and you can switch between vivid and natural saturation modes, plus a few colour temperature presets. Comparing directly to the Moto G6, the more expensive phone seems to have a slight edge for bringing out the deepest reds in Vivid mode, but there isn’t much in it. 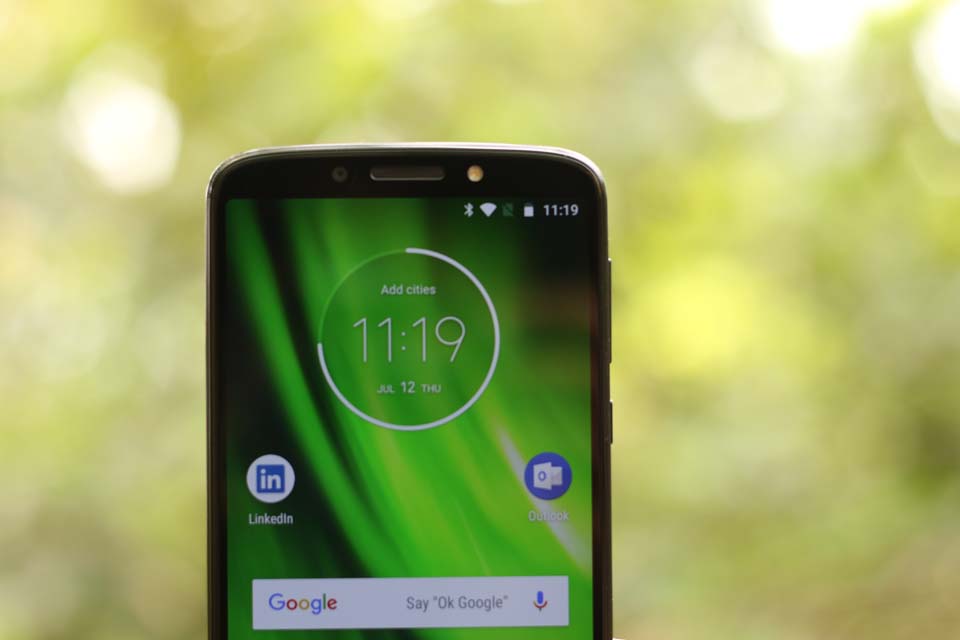 The Moto G6 Play’s screen visibility outdoors on a bright day is perfectly solid too.

The device comes from the trusted house of Motorola and offers a premium design and build at a sub Rs 15,000 price. The big battery is definitely worth some extra moolah and buying into Moto assures you of the device being built well enough to last a couple of years. 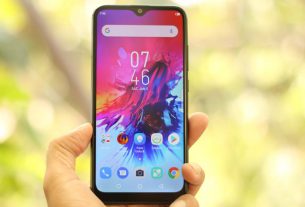 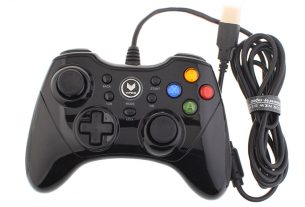 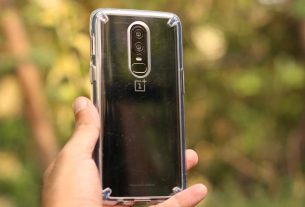