My newfound love of mechanical keyboards has been a little shaken of late. While I’m still not completely down with paying over Rs 10,000 for a keyboard, the Asus ROG Claymore made a pretty convincing argument for burning a hole in my bank card. Then the Corsair K70 Lux RGB I reviewed went and ruined things slightly with its weird spongy Silent Cherry MX switches and for a long time part of me just wanted to go back to my regular old Roccat Isku membrane keyboard and have done with it all.

Fortunately, the HyperX Alloy Elite has restored my faith in these clacky beasts, which is surprising given my test sample came with Cherry’s (supposedly) extra loud blue MX switches rather than the slightly quieter red or brown ones you can also find it in. Even better, the non-RGB version I’ve got on test today only costs around Rs 7,500, making it a heck of a lot cheaper than its rainbow-coloured rivals. Let’s see if it can break into our Best gaming keyboard rankings. 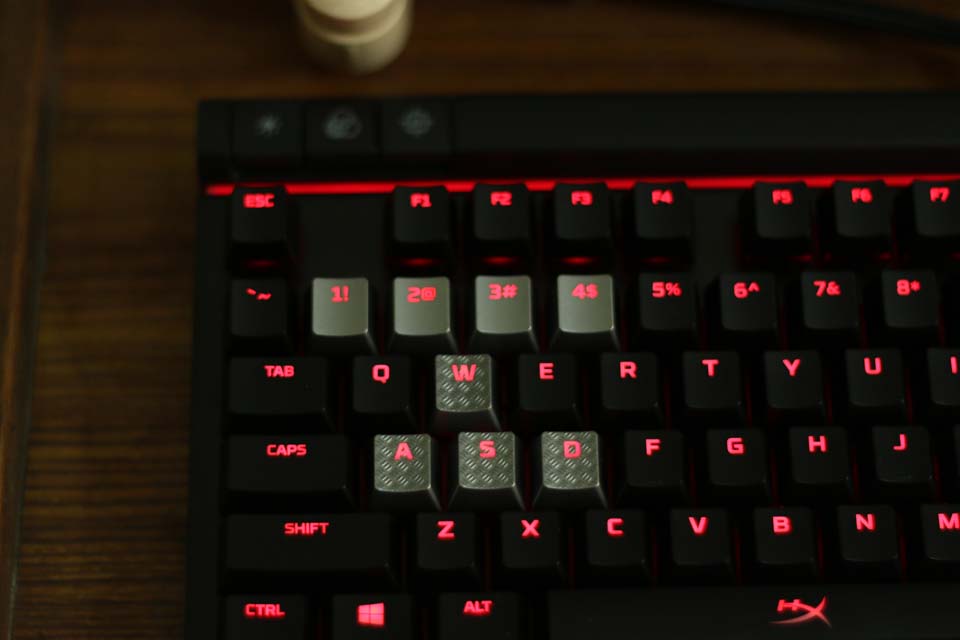 According to the hive mind, blue Cherry MX switches are generally regarded as being better for typing due to their more precise, click-style press actions and greater aural and tactile feedback. The trade-off is that they end up being much louder and clackier as a result. Red Cherry MX switches, meanwhile, are typically said to be better for gaming as they’re a bit faster and a fraction quieter, while brown ones sit somewhere in the middle as a kind of half-way house between gaming and typing. 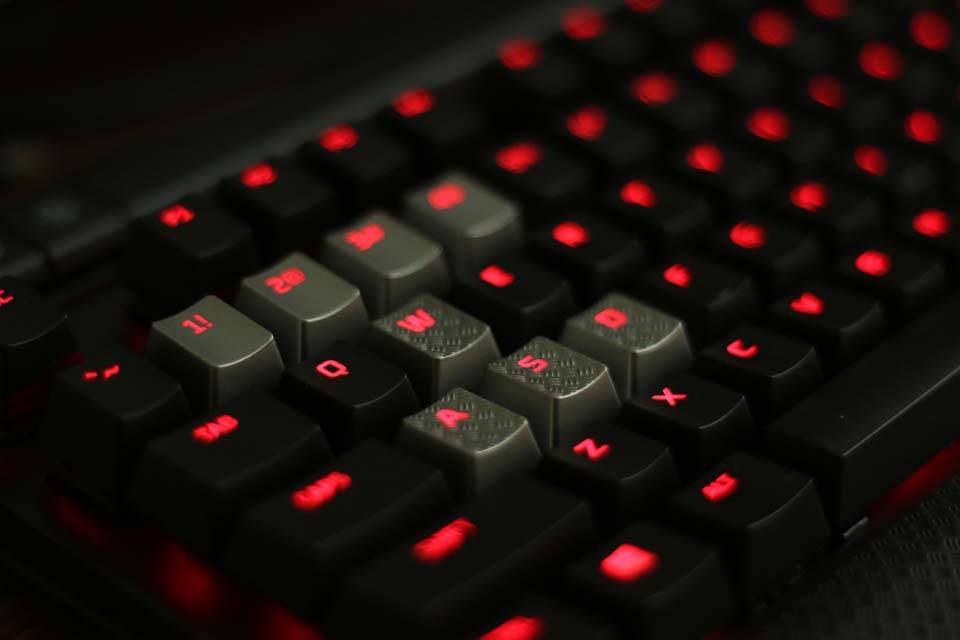 In terms of noise and one being marginally less irritating than the other, however, I’d say that the red and blue switches I’ve tried (the former on the Claymore and the latter on the Alloy Elite) are much of a muchness.

Both are pretty anti-social when used in the vaguest vicinity of another human being, but even when I was typing in isolation I wouldn’t say one was necessarily more pleasant on the ears than the other. This is a good thing for the Alloy Elite, as you’re not really having to compromise on sound to get a cheaper mechanical keyboard.

I didn’t feel like the blue switches on my particular Alloy Elite put me at a disadvantage when it came to playing games, either. You might notice a difference if you’re into your esports or your reaction times far exceed what us mere mortals would consider normal, but for the vast majority of people I don’t foresee it being a problem whatsoever. In Doom, for instance, each keystroke felt just as quick and precise as the Claymore when I was rushing around shoving shotgun shells in demons’ faces, and at no point did I feel like I was being let down or restricted in any way by having blue switches instead of red ones.

Then again, typing on the blue Alloy Elite felt pretty much identical to the red Claymore as well. This isn’t much of an issue, since both felt brilliant when it came to everyday office work, but I also don’t think you’re really gaining anything by specifically choosing blue switches over red ones here. Again, those with sensitive fingers may be able to discern the tiniest of differences in each individual key press, but not I.

Instead, the Alloy Elite’s real advantages come from its fuller feature set. This includes a number pad, four dedicated media keys and a lovely little volume roller in the top right corner. As you can see in the image immediately above, you also get a button to cycle through four levels of brightness for the Alloy Elite’s red LEDs (including being able to turn them off altogether), another to change the lighting effect and a third that activates HyperX’s game mode, which disables the Windows key and prevents any notifications from disrupting your game.

I also greatly prefer the Alloy Elite’s overall design. For starters, its plain steel frame is infinitely more pleasing to the eye than Asus’ slightly try-hard sci-fi patterns, and its tasteful letter font make it look much more ordinary and ‘non-gamery’ than both the Claymore and the Corsair K70 Lux RGB.

The textured wrist rest also felt very comfy under my hands, and its pair of fold out feet underneath provide just the right amount of elevation for quick and accurate typing, which is more than can be said for the rather more awkward height of the K70 Lux. You also get eight replaceable textured caps for the WASD and 1234 keys that come in silver rather than black to help them stand out on the keyboard, and a USB2 port on the rear for plugging in your mouse. 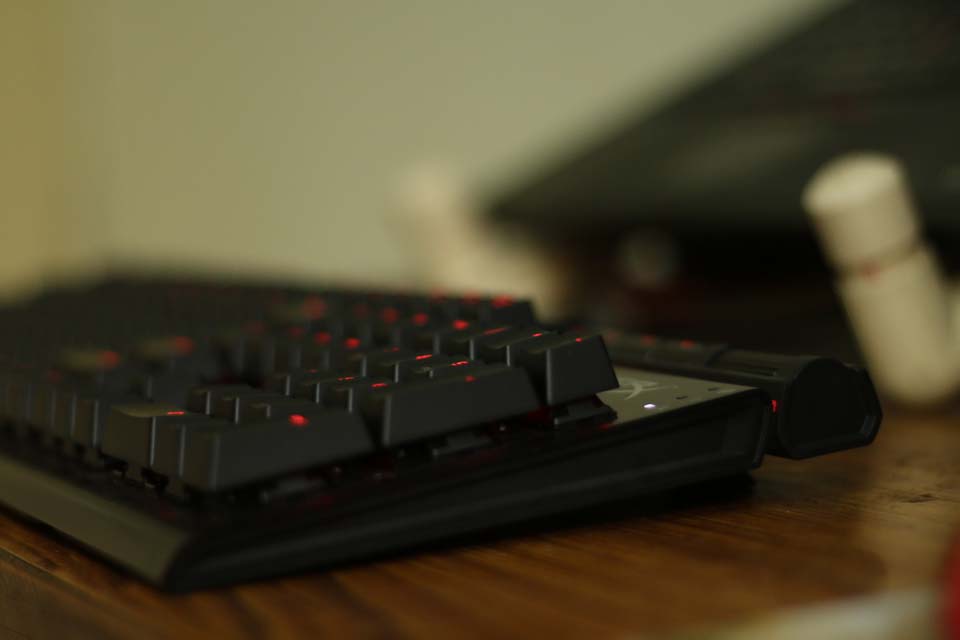 Of course, those who prefer their keyboards to double up as makeshift light shows may be disappointed with the Alloy Elite, as its red LEDs can only really be seen through each letter and number cutout. A teeny bit of light is visible from underneath the keys, but even the brightest light setting only produces a very faint red glow along the base. Personally, I prefer this toned down approach in order to keep distractions to a minimum, but you may want to look elsewhere if you prefer something a bit more ostentatious.

All in all, I really quite like the HyperX Alloy Elite and would immediately recommend it over the Corsair K70 Lux (both in its regular and RGB forms) and the Asus ROG Claymore. It’s a pleasure to type on and its sturdy, subtle design makes it great value for money too. As a result, regardless of whether you want an RGB or non-RGB mechanical keyboard, the HyperX Alloy Elite should definitely be at the top of your list.